How Many Axis Do I Need on a Press Brake?

A press brake is a vital piece of machinery for any metal fabrication shop but it can be a complex choice when deciding how your new press brake should be equipped. There are multiple options in machine makes, models & sizes as well as what drives them (As we discussed in this article: What's Driving Press Brakes?). With all that complexity how do you decide how many axis you need on a press brake? What axis are important to your needs?

In this article we will break down the axis of the press brake describing what they do and how the might benefit you in order to make your choice when purchasing a press brake much easier.

What is a Press Brake and How is it Used?

A press brake is a machine utilized in metal fabrication shops to form sheet metal into various shapes such as boxes, pans and other important components (more on the basics was detailed here: Press Brake Operation Basics) They press a moveable ram holding a forming “punch” into an opposite shaped “die” while the material to be formed is held in between. Under a certain amount of tonnage the press brake forces the material to take on the shape of the punch and die. How many bends are made, how accurate those bends are and how repeatable the parts are from part to part are all functions that vary from one press brake to another and can be affected greatly by how many axis the press brake is equipped with.

There are 3 main types of axis controlled by the CNC on a press brake and while many more axis can be added these 3 categories are the basics that every fabricating shop using or thinking of purchasing a press brake should know.

Control of the Bending Ram

The very first axis to be controlled on a press brake is the ram (or bed in upworking variants). The Ram controls the depth of bend and in most cases this means the angle of bend as well as most operations are using the air bending technique. This axis is termed the “Y-Axis” and is commonly seen as Y1 & Y2 which refers to the right hand and left hand control of the down force mechanisms.

Control of the Back gauge

The next axis to be controlled on a press brake can add a bit more complexity. These access are the backagage and they control the accuracy of the flange being formed. Depending n the complexity of the parts you are making, the back gauge can have as few as 1 Axis (X) or as many as 6 Axis (more on some machines). These axis, like the Rams Y-Axis can also have variants of X or X1/ X2, R or R1/R2, Z or Z1/Z2 which symbolizes the individual controllability of each of the axis independent of the other. 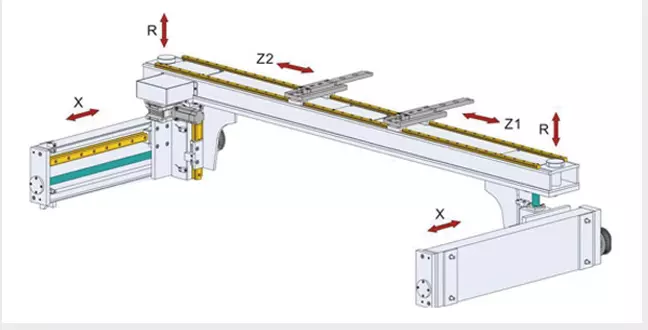 The backgauge axis options are:
X-Axis: This axis controls the gauge’s forward and reverse motion. It positions the stop fingers that the operator uses to rest the material against closer to, or further from the bending tools. This axis is critically important in maintaining the correct flange length of the part being formed. In the variant X1/X2 the gauge stop fingers can be independently moved in or out thereby adjusting for tapered and more complex parts.
R-Axis: The R-Axis on a press brake is the next necessary axis in press brake forming. It allows the motion of the gauge fingers up or down, positioning the gage fingers to gauge off of preformed flanges which descend under the bending plane or even supporting heavier pieces. The R-Axis also allows for a longer gauging position as typically the gauge will allow for 2 or more gauging points on the finger when the elevation is changed. In the R1/R2 variant of this axis the gauge fingers can independently be lowered/raised allowing for positioning to gauge and support very complex pieces.
Z-Axis: The Z-Axis on a press brake is the ability for the gauge fingers to move in a programmed pathe left or right. This axis of motion allows the ability for the operator to have multiple tool sets in the brake while the gauge fingers follow from setup to setup performing the necessary bending functions as desired. In the Z1/Z2 variant again these axis are completely independent of one another and can be positioned as such. A great example of utilizing a Z1/Z2 axis setup would be a very long but narrow drain/drip pan. The Z1/Z2 axis would be positioned very close for the end forming but then spread far apart for proper support when forming the longer bends.

The next series of press brake axis support optional features that can enhance the bending accuracy, productivity and material handling. The most common of this class of axis are:

What are the Axis and Their Functions?

As we detailed above the press brake axis has the following functions:

Controls the Ram Up/Down (or bed up/down on some designs). This axis is responsible for the correct angle of bends.

Controls the Forward/Backward (IN/OUT) motion of the backgauge. This axis controls the length of the flange being formed.

This axis moves the backgage UP/DOWN and assists the X-Axis by allowing more gauging positions and providing material support.

This axis controls the position of the gauging fingers literally (L/R) and positions the gage fingers via the part program for an operator's convenience and safety.

What is the Minimum Number of Axis Needed on a Press Brake?

The minimum number of axis’s needed on a press brake is one. Simply the Y-Axis to control the UP/DOWN of the Ram (or bed on some designs). This axis is the most critical as it controls the angle of the part being formed. If the axis presses too far the part is overbent, if it doesn't press far enough the angle is too underbent. Accurate control and repeatability of this axis is the most important feature when selecting a press brake.

The most common configuration we see, is what many call a 3-Axis press brake which includes Y1/Y2, X & R. This combination of axis provides the most functionality on a press brake with the most affordability too.

Things to Consider When Purchasing a Multi-Axis Press Brake

When purchasing a multi-axis press brake it is important to consider first the complexity of parts you are forming and the accuracy requirements of the formed parts. Also note that previous fabrication operations are important as well and will contribute from the accuracy of your press brake. If you feed the press brake from a laser machine you likely are getting very accurate parts and therefore should lean towards additional optional axis’s on the brake to help you continue that accuracy. However if your forming parts off of a plasma table your likely not working with the most challenging tolerances.

Subsequent operations you may have planned after material forming on the brake can also greatly influence the options recommended for your press brake. For example, if you plan to use robotic welding in your manufacturing process it is vital that your press brake produces accurate forms, bend after bend without a stack-up of errors. Robotic welding systems can be a great value and time saver for the production fabricator but they require accurately formed and repeatedly formed parts every time for success.

At Southern Fabricating Machinery Sales, Inc we know press brakes and forming. Our experts can assist you in selecting the right press brake for your application and budget. Check us out on the web at www.southernfabsales.com or call us directly for immediate help at 813-444-4555 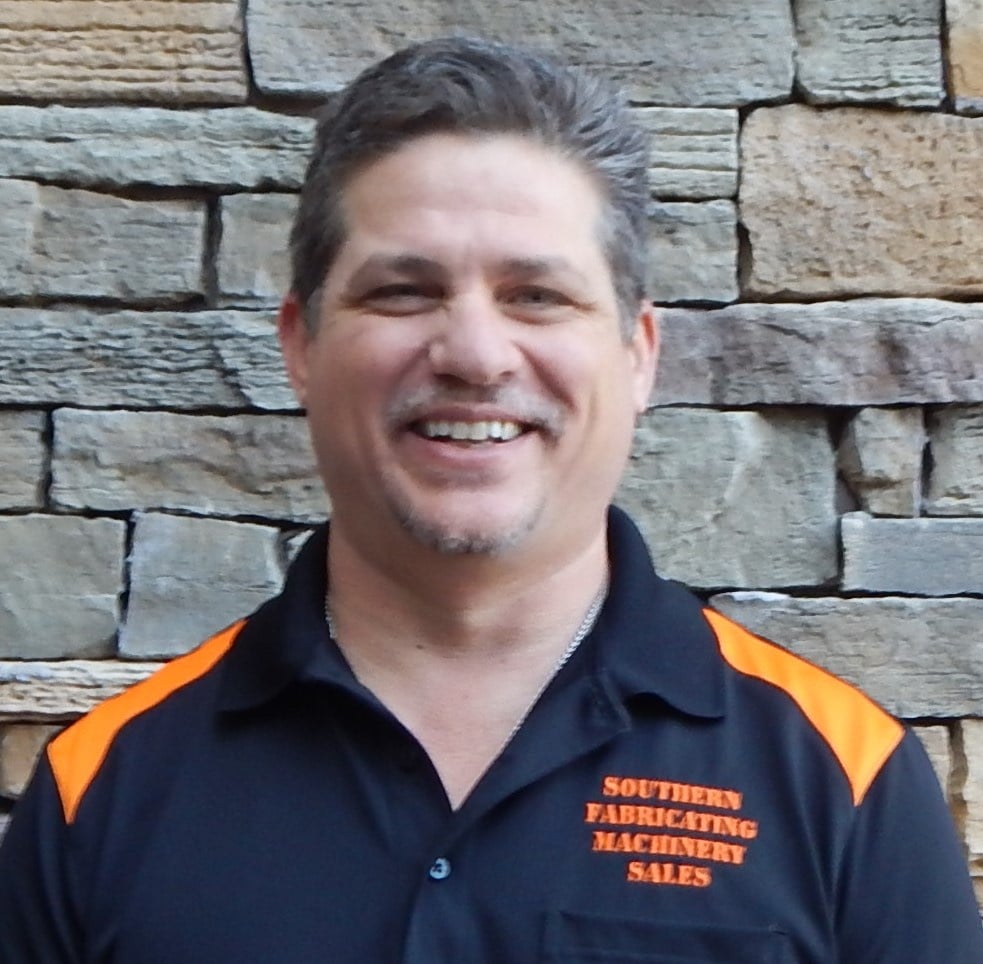 Press Brakes have evolved over the years to resolve many of the issues inherently problematic with the process itself. One of these issues is the process of ...

How Does a Modern Press Brake Work?

If your asking yourself “What is a press brake?” or “How does a Press Brake work?” then this is a great place to start. In this article we describe what a ... 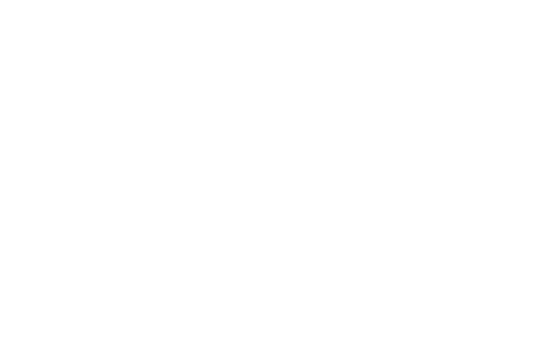