Laser Cutting Performance is constantly being improved on an almost daily basis, but achieving real performance in laser cutting is about more than the machine itself. Real performance is getting a quality part off the machine as quickly and efficiently as possible. In the past it meant getting higher and higher powered laser resonators which in turn led to faster and faster cutting times. Many shops also have added automation or more laser cutting systems in order to perform a variety of work on an ever increasing variety of materials such as copper, brass and thicker Aluminum.

What is Laser Cutting?

From the CO2 resonators of the past to the Solid State Resonators with Fiber Optics of today, laser cutting is evolving into an ever more necessary piece of equipment in the fabrication job shop. The “LASER” in laser cutting is actually an acronym (did you know that?) for LIGHT AMPLIFICATION STIMULATED BY EMITTED RADIATION. That acronym was derived from the original process used to intensify the light beam to an intensity so hot it would vaporize metal. On the original CO2 systems this simply meant a device such as a Radio Frequency Transmitter was affixed to a chamber with a source of light passing through it. The constant bombardment of Radio Frequency Waves caused the particles of light to collide thus splitting the particle, thereby creating more light, thus the amplification. As the light passed through the chamber (usually a glass tube referred to as “the glass works”) it was reflected back through the chamber again and again letting only a small amount of amplified light to escape the chamber.

In Solid State lasers the process is much simpler AND has little, to no consumable parts. The solid state resonators utilize semiconductor diode lasers to efficiently convert electricity into light, harnessing hundreds of these together is the process that amplifies the light further and further allowing for engraving and cutting.  With systems upwards of 23KW available (currently available lasers in the machine tool market only go to 12KW maximum due to other limitations such as cutting, motion systems and most importantly, cooling) these solid state resonators are standard on the bulk of the machinery sold today and the future of laser cutting.

How Does a Laser Actually Work?

Whether the laser is created in a CO2 or Solid State resonator, the now highly amplified light is then directed either through mirrors and lenses down a beam pathway (CO2 Systems) or via a fiber optic wire to the cutting head on the machine where it is then refocused and delivered to the material at such intensity it causes vaporization of the materials beneath it. With the 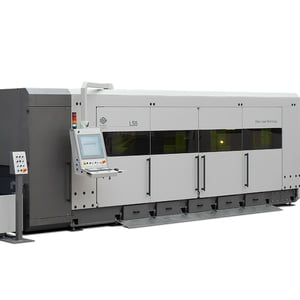 help of high pressure gasses (usually O2 or NO2) which are blown directly around and the laser beam, the now vaporized metallic “dust” is quickly removed from the material, leaving only a clean smooth molten surface behind. Typically the higher the wattage power of a resonator, the faster the material removal process.

Coupling this laser system with a highly accurate and responsive motion system allows the laser to be delivered anywhere within the travel of the machine in just a matter of milliseconds smoothly and cleanly cutting materials such as steel, aluminum, brass, copper and many alloys of these materials. Other materials can also be cut including some plastics and wood however the laser burns with an intensity so hot that if you're not careful can cause some materials to burn.

Performance in laser cutting can be measured in one of 2 ways: Speed & Throughput. However you should be aware that many times, as with any type of manufacturing, simply increasing one manufacturing process can simply move the bottleneck in your shop down the line. If your parts are to be later processed in welding, assembly, press brake forming or the like, then faster laser cutting may be a waste of money as your machine will load up these other processes very quickly and sit idle the remainder of the time. With that prospect in mind if Laser Cutting Performance is still a need to consider the following:

What are the Drawbacks of Increased Performance in Laser Cutting?

The drawbacks to achieving the highest productivity in laser cutting are cost, space and heat. Moving to an 8, 10 or 12KW laser cutting system definitely will improve speed in a  comparative spreadsheet analysis, but the cost associated with these units can substantially increase, as much as doubling the price of your laser system. Also it is known that some manufacturers utilizing these highest powered systems have difficulties keeping the cutting heads cool enough to prevent damage leading to often costly downtime and repairs which eliminates any productivity gained whatsoever. Space is also a major consideration as adding a simple Load/Unload system can double the space required of the basic system and are often inflexible and difficult to apply later.

If your in the market for a new, or new to you fiber laser cutting system then Southern Fabricating Machinery Sales has many options to choose from. Machines such as the Polaris Laser or Piranha Laser can be great solutions in entry level laser cutting with a payment under 5K per month. Adversely for true high performance a solution from BLM GROUP can provide the speed, efficiency, flexibility in automation and upgradeability that performance minded buyers are looking for. Check out all the options available below.

The Capabilities of Laser Tube Cutting

Laser cutting has grown significantly in the past 20 years to include laser tube cutting, automated tube processing and well into the tube fabrication industry ...

Processed tubes are an essential component for most of the things we utilize in our daily lives. Whether you are plowing a field, working out at the gym, or ...

Plasma Cutting vs. Laser Cutting: Which Fabrication Technique Is Better?

Is your machine shop or manufacturing plant looking for ways to be more efficient and increase productivity? If you want your facility to be both more ...